The Altered Synthete is one of the 5 main bosses found in Cavas’ Fragment memories inside the Memory Map.

The Altered Synthete will appear on the Memory Map Randomly(possibly only after you have completed Cavas’ Memory). Once it appears, the player will need to use their Memory Fragments to create a path to the boss area. 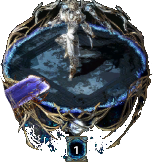 The Altered Synthete slashes in front of him and releases a frontal wave of Cold Damage.

The Altered Synthete summons several sets of triangles around him that collapse on themselves dealing Cold Damage.

The Altered Synthete fires a powerful projectile in front of him and sends out 2 waves of damage behind him. Both attacks deal Cold Damage.

If the player approaches the outer circle of the arena next to the smaller circles, a Stationary Filament will spawn. These filaments fire projectiles at a central point dealing Cold Damage. It is best to not approach these, as it will make the fight harder.