Craiceann, First of the Deep is one of the 4 main Spirit Beast Bosses. He is located in Craiceann’s Cove.

This boss encounter is a multi part process. We will take you through how to grant access to Craiceann, how to fight him, and how to deal with the final craft that you receive after capturing them.

In order to grant access to Craiceann’s Cove, you will first need to capture a Craicic Spider Crab. This beast is found randomly throughout Wraeclast. You can also pick one up over at poeapp. This beast can be identified with the following symbol: 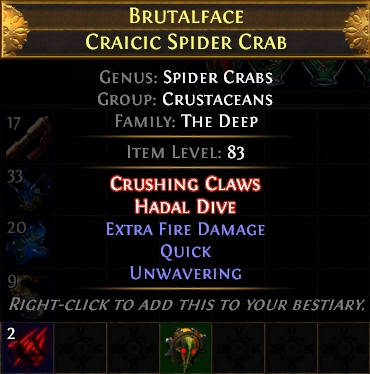 Once you have come across this beast, Einhar will automatically capture it like any other beasts that one would encounter in the wild. The beast will be placed into the player’s Menagerie. From this point, the player will need to travel to their Menagerie and interact with The Blood Altar. On the crafting list, there will see a section called “Open a Portal…” Under this section, there is an option called “to Craiceann’s Cove.”

Select this option and press the craft button. This will begin a small beast encounter where you will have to fight 4 beasts. The objective is to kill all of these beasts. After completing this small challenge, 6 portals will then be opened  to Craiceann’s Cove around The Blood Altar.  If the player dies during this encounter, the Craicic Spider Crab will be lost and must be acquired again.

When you go through a portal, the player will enter a small area free of monsters. There will be a door that leads into the arena for the boss encounter. In the arena there are a couple of small pack of monsters aiding Craiceann. The encounter will begin once you approach Craiceann. His attacks can be found HERE at the bottom of this guide.

Once Craiceann reaches 50% maximum Life, he will burrow to the center of the arena and move to a new arena. An entrance to this new arena can now be found in the center of the first arena. From here, the player will continue the fight until the boss has been slain. Craiceann is guaranteed to drop 1 of his unique items.

Craiceann will stand up and slam the ground in front of him releasing a large wave of Physical Damage. He then will charge towards the player. The initial damage wave will form small fissures that linger for a short period of time dealing Physical Damage.

Craiceann will burrow and move positions within the arena.

Craiceann charges in a straight line and becomes stunned for a short period of time at the end of his animation.

Craiceann stands up and slams the ground sending out a small shock wave of damage in front of him. This attack deals 25% of Physical Damage converted to Cold Damage.

Crafting Aspect of the Crab

After you have completed this encounter and the spirit boss has been slain, Einhar will capture Craiceann automatically. This is the beast that is required for the Aspect of the Crab craft on The Blood Altar. Once he has been captured, this recipe will appear on The Blood Altar.

When applying this craft to an item, place your item in the altar and click craft on the “-Aspect of the Crab skill.” For more information on Beastiary Crafting check out PerryThePig’s Guide on Crafting.

Enjoying the content? You can show us yoursupport HERE!