The Rewritten Synthete is one of the 4 main bosses found in Cavas’ Fragment memories inside the Memory Map.

The Rewritten Synthete will appear on the Memory Map Randomly(possibly only after you have completed Cavas’ Memory). Once it appears, the player will need to use their Memory Fragments to create a path to the boss area. 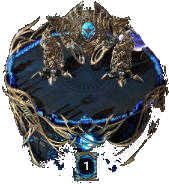 Once the player has reach this Boss Node, they will enter a small area containing the Decaying Map Device. This map device needs to be interacted with before it will open 6 portals. Next, the player will fight their through a map like area, before finding the portal leading into the Boss Arena. Once, inside this arena, the player will see Cavas’ spirit and a Distant Memory Stabilizer. This Stablizer will need to be interacted with in order to spawn The Rewritten Synthete. The encounter is pretty straight forward compared to other bosses and contains no phases.

The Rewritten Synthete summons a Vortex on the ground that deals Physical Damage Over Time.

The Rewritten Synthete charges his fist and slams the ground in a large area in front of him. This attack deals Physical Damage.

The Rewritten Synthete plants both arms in the ground and fires a large laser from his chest dealing Physical Damage and Lightning Damage.

The Rewritten Synthete charges up, springs into the air, and slams the ground dealing Physical Damage.

The Rewritten Synthete spins in a slow circle and releases many projectiles from both of his hands. These projectiles deal Lightning Damage. and can easily be blocked with minions or Frost Wall.

The Rewritten Synthete raises his arms, slams the ground in front of him, and releases a series of small turrets on the ground. This attack and turrets deal Physical Damage.

The Rewritten Synthete summons Stationary Pylons on the ground that deal Lightning Damage. These can be summoned in an inert state and will not start attacking until the player walks into its proximity.