Izaro deals large amounts of Physical Damage. He can wield 3 different weapon setups; Two Handed Mace, Dual Swords, and Sword and Shield. Mount on his back, The Goddess of Justice is able to use her own spells during the fight.

Izaro can wield three different weapon combinations, each having their own attacks. 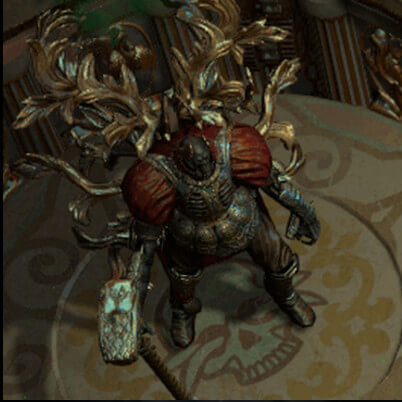 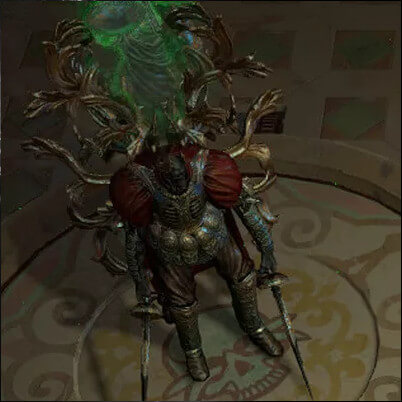 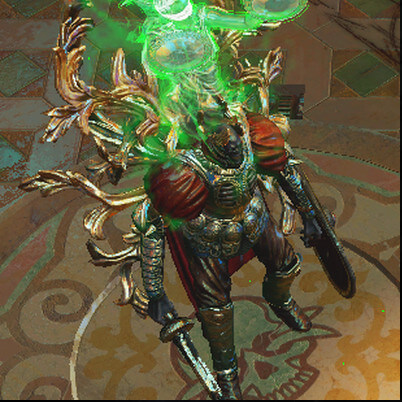 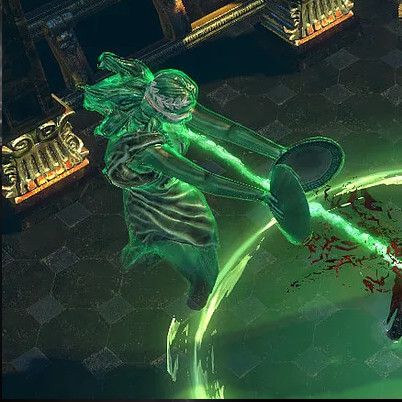 Izaro powers up, charges the targeted location and swings his shield at the player. This attack deals Area Damage and Physical Damage. The animation is very noticeable and easily avoidable. This attack is only used with a shield.

Izaro slams the ground, sending a cascading wave of Physical Damage at the player in a line. If hit by this attack, a shock-wave will be triggered, hitting the player a second time. This attack can be used with any weapon combination.

Izaro leans forward and channels spikes that come from the ground. These deal Physical Damage Over Time and greatly slow the player. This attack can be used with any weapon combination.

Izaro charges his Mace over his head, and slams down in front of him. This attack deals heavy Physical Damage and has a large area of effect. This attack can only be used with a mace.

Izaro jumps into the air, leaping towards the player. He slams the ground dealing Area and Physical Damage. This attack can be used with dual swords or mace.

Izaro spins in a circle and unleashes a lethal Physical Damage wave that travels quickly across the arena. Similar to Reave. This attack can be used with any swords.

Mounted on the back of Izaro, The Goddess is an un-targetable mob that aids Izaro during the fight.

The Goddess shoots a barrage of projectiles that deal Fire damage in an array in front of Izaro.

The goddess charges a green circle that teleports the player to a random location on top of traps. This skill is not used in Normal Labyrinth.

Similar to Mortar Barrage, but instead spawns skeletons on impact.